Born in Gladwin and raised in Clare, where her family ran the local Oldsmobile dealership and her mom was a nurse, Debbie Stabenow is relentlessly focused on standing up for Michigan families, helping Michigan businesses create jobs here at home and protecting our Great Lakes and outdoor heritage.

Growing up in Clare, Debbie learned the importance of faith, family and hard work at an early age. She and her family were active volunteers in the community and in the Clare United Methodist Church. Her Mom and Dad always told Debbie and her brothers if you benefit from the work of others, “you have a responsibility to give something back.”

Debbie grew up in a musical family where she learned to play the piano, guitar and the clarinet in the school band. Music is still a big part of her life. Debbie loved 4-H and she loved growing up surrounded by lakes and the fun of outdoor sports year-round!

Debbie has always been the protector of our Great Lakes and waterways. As a U.S. Senator, the first bill she passed into law banned oil and gas drilling on our Great Lakes. She’s the author of the Great Lakes Restoration Initiative and has been relentless in ensuring that the program remains funded. She authored and passed the bipartisan Stop Invasive Species Act to require the federal government to take quicker action to stop the spread of Asian carp.

The national magazine Outdoor Life awarded Senator Stabenow its Open Country Award for her work to protect the Great Lakes, provide greater access to lands for hunting and fishing, and to make historic investments in conservation to improve wildlife habitats.

Senator Stabenow believes we need to be exporting our products, not our jobs. She wrote the Bring Jobs Home Act to eliminate the tax loophole that companies use to write off moving expenses when shipping jobs overseas, and she created a new U.S. trade enforcement center to crack down on countries that cheat our trade laws. Her Make It in America Act ensures that American taxpayer dollars are spent on American-made goods and services.

Please click here for a full list of Debbie’s legislation and public acts that have been signed into law. 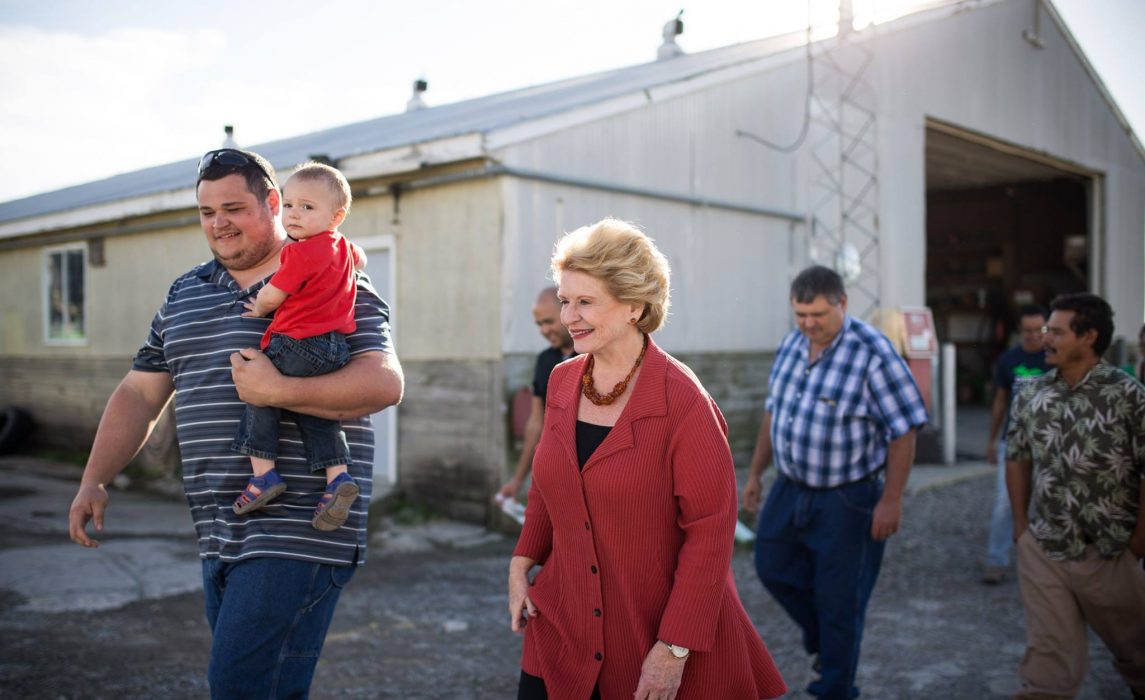 Senator Stabenow serves as Ranking Member of the Senate Agriculture Committee. She authored the bipartisan 2014 Farm Bill, which streamlined over 100 programs, saving more than $80 billion and making historic investments in Michigan agriculture, small towns, and local food systems. Working with Democrats and Republicans, she led the passage of the bill – hailed as the most significant reform of agriculture in decades – with broad bipartisan support. The Farm Bill also made unprecedented investments in land and water conservation, with significant new resources being dedicated to the Great Lakes.

She built on that success in coauthoring the bipartisan 2018 Farm Bill, which offers new support for beginning farmers, veterans, and urban agriculture; permanent support for exports and local food promotion; strengthened risk management tools; critical improvements for dairy and specialty crops; and new investments in conservation, rural water infrastructure, and high-speed internet. The legislation passed the Senate on a bipartisan vote of 86-11 – more votes than any Farm Bill in history.

As the leader of Michigan’s Congressional delegation, she spearheaded a bipartisan review of Michigan’s military installations to help identify new opportunities to create Michigan defense jobs. Senator Stabenow’s efforts and partnerships with Michigan innovators and entrepreneurs are making a real difference in Michigan business expansion and new job opportunities available for students interested in technical professions and professional skilled trades.

Senator Stabenow has shown that she’s never been afraid to take on special interests on behalf of Michigan families. She’s taking on the prescription drug companies to bring down costs through her bills to allow people to buy safe, low-cost prescription drugs from Canada, to give Medicare the power to negotiate lower drug prices, and to ban “gag clauses” that prevent pharmacists from telling customers when they could save money by paying out-of-pocket instead of using their insurance. She authored legislation to stop raises and bonuses for pension fund executives who are slashing retiree pensions and to eliminate $22 billion in tax breaks for the largest five oil companies in the world.

Senator Stabenow knows how to get things done for Michigan by working across the aisle and never giving up. She passed a bill to stop the IRS from hitting homeowners who are underwater on their mortgages with additional income taxes, led the effort to infuse $262 million into neighborhoods in Detroit, Flint, and other communities to combat blight, rebuild neighborhoods and assist homeowners, and championed critical efforts to provide $170 million in federal assistance for Flint to repair and replace pipes and address the important health needs of children and families affected by the lead crisis.

Thanks to her bipartisan leadership on health care, the Children’s Health Insurance Program – known as MI Child in Michigan – received historic full funding for 10 years. She also authored successful bipartisan legislation to extend funding for community health centers, which provide quality medical, dental, vision, and behavioral health care to more than 680,000 people in Michigan, including 225,000 children and 12,700 veterans. Medicare and the Department of Defense TRICARE system now cover the creation of care plans for Alzheimer’s patients and their families, and the No. 1 cause of death for women – heart disease – is now being addressed more seriously as a result of Senator Stabenow’s successful efforts.

The daughter of a World War II veteran, Senator Stabenow has been a longtime advocate for the more than 600,000 veterans living in Michigan. She authored legislation to pave the way for Michigan veteran James C. McCloughan to be awarded the Medal of Honor, and she has helped open new and expanded V.A. clinics in Alpena, Bad Axe, Cadillac, Clare, Cheboygan County, Grayling, Oscoda, and Wyoming. She has fought to ensure that veterans have the health care, jobs, and educational benefits that they deserve and have earned. Debbie has a lifetime of deep roots in Michigan. Her dedication to the people of Michigan is reflected in the diversity of those who support her. From working men and women, to top business leaders, to small business owners and agricultural producers, to veterans, law enforcement and community leaders, Debbie has earned the support of people and families across our great state.

Since graduating from Michigan State University with a Bachelors and Masters Degree, Debbie has lived in Lansing.  She has two grown children, Todd and Michelle; a daughter-in-law, Sara; a son-in-law, Scott; and five amazing grandchildren.